In this post, I’ll compare the similarities and differences between the Amazon Echo Studio vs Echo Plus smart speakers with Alexa and premium audio.

If you simply want to know the key differences between Echo Studio vs Echo Plus, here they are:

The larger Echo Studio features Dolby Atmos processing and more audio hardware with three 2″ midrange speakers, a 1″ tweeter, and a 5.25 ” woofer. This is in contrast to the 0.8″ tweeter, 3″ woofer, and standard Dolby sound in the Echo Plus. They both have a built-in Zigbee smart home hub.

With these significant enhancements, the Echo Studio is my enthusiastic pick for premium sound in a smart speaker, though it does cost a bit more. You can check the latest price of both the Echo Studio and the Echo Plus over at Amazon using the buttons in the following table.

Echo Studio
Echo Plus
Best Sounding Echo
A Cut Above 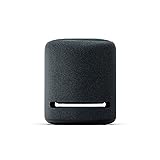 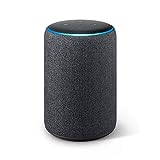 There are other advantages of Echo Studio vs Echo Plus too. I will go into them in more detail below.

I bought the Echo Studio last year on Black Friday. However, it took me a long time to get it out of the box because I wanted to film an “unboxing” video for my YouTube channel.

I gotta say, what a big mistake!  The new Echo Studio just rocks. It is my best sounding speaker by a mile and it sounds amazing as part of my multi-room music configuration that now contains, the Echo Studio, an Echo Show, 2nd Gen, an Echo Show 8, two 3rd-Gen Echo dots, and an old Echo first-gen speaker.

Yes, I have a lot of Echos. The Studio sounds better than all of them.

This is two primarily to some major design upgrades that Amazon has packed into its latest speaker.

Here is what the Echo Studio vs Echo Plus looks like on the outside: Here is what the Echo Studio looks like on the inside : And here is an inside view of the Echo Plus . As you can see, the Echo Studio really packs in a lot more hardware.

Here is what the Echo Studio looks like sitting on my rounded bedside table lamp beside my bed:

Yes, I need hide the wires but as you can see this is meaty premium speaker compared to the other Echo devices.

There is no question that Amazon designed the Studio to not just compete with its competitors like Sonos, Apple Homepod, and Bose. IMHO, Amazon’s foray into the premium audio market and relatively affordable price point actually beat them at their own game.  The sound is just amazing. And it should be this bad boy packs a real punch with “multi-dimensional sound” that cranks out of not three, not four, but FIVE speakers and Dolby Atmos processing.

The reason the Studio sounds so good is that it includes microphones inside that are designed to calibrate its audio performance based upon its surroundings. Now, how is that for smart?

If you can’t already tell I absolutely love this speaker.

Here is the unboxing video I did out on my YouTube channel that took me almost a year to make!

So what about the Echo Plus? I have always been impressed with the sound of my Echo Plus. Next to Echo Show 2nd Generation, this was my favorite sounding Alexa speaker. But the Echo Studio just blows it out of the water. And with the release of the new Amazon Echo [3rd Generation], there is really no compelling reason to get the Plus now, unless the temperature sensor and Zigbee Hub are important to you.

What Can the Echo Plus Do?

Echo Plus was Amazon’s answer last year to improved sound quality from some of the competitors’ sound speakers mentioned above.

It also provided a Zigbee smart home and a built-in temperature sensor so it could be used to create routines with smart thermostats for example.

However, Amazon recently announced its update to the new Echo [3rd Generation] will include the same premium hardware that is in the Plus. So, I’m scratching my head wondering if the Plus is worth the extra expense.

In the following video review, Digital Trends talks about some strengths and weaknesses of the Echo Plus:

Let’s take a closer look at the sound quality of both of these devices.

The Echo Studio comes with three 2” (51 mm) midrange speakers, one 1” (25 mm) tweeter, one 5.25” (133 mm) woofer. In addition, Amazon added Dolby Atmos processing on board as well as an amplifier with a bass aperture to maximize bass output at 33OW.

Perhaps the best feature of the Echo Studio is that it automatically adapts to room size and acoustics to optimize for sound quality.  No need to fumble with an equalizer, the Studio uses its built-in microphones to listen to the acoustics of a room and then optimize its 3-D sound experience.

This just blew me away.

By contrast, the Echo Plus has a 0.8″ tweeter and 3″ woofer. It leverages standard Dolby audio and does not auto-optimize for room acoustics and size.

If you want to know which speaker is louder, it’s the Echo Studio.  You don’t need to look any further than the speaker’s onboard hardware and amplifier to understand that the Studio is significantly louder than the Plus.

Both speakers sport Amazon’s latest generation design, with solid-state plastic and mesh outer wrapper. While the Plus lets you choose between three colors—Charcoal, Heather Gray, and Sandstone—the Echo Studio only comes in gray.

Echo Studio also has a bit of a signature. That is, there is a thin rectangular hole that runs across the bottom ¼ of the speaker. This is different than any other Echo device. It looks and feels richer than the Plus in my opinion.

OK, I’m going to admit the background music in this video from UTILITARIAN TV is a little creepy but if you want to get an idea as to the design of the two speakers this is pretty good.

What Can the Echo Studio vs Echo Plus Control?

There are also a ton of smart devices out there that don’t require a bridge or hub at all. These include:

In comparing Echo Studio vs Echo Plus in the realm of smart device control, the functionality is essentially the same. My Studio seems to be slightly more responsive than my Plus but that may just be because I have the Studio directly beside my bed. Here’s a closer-up view of it on that rounded beside-table lamp beside my bed. See that empty “bottom shelf” down there? I had initially planned to put my Echo Sub down there but it was too big to fit. Either way, it still sounds killer on the other side of the room. Having an Echo Studio and Sub on the same multi-room music config just sounds awesome.

Are There Any Alexa Differences to Be Aware Of?

The speakers are also identical where Alexa is concerned.

You get all of the benefits of Alexa on both devices. Well, except for those that are only available on screened devices, like the Echo Show of course.

What are the Major Differences Between Echo Studio vs Echo Plus?

Here is a list of major differences between the Amazon Echo Studio and Echo Plus:

Echo Studio vs Echo Plus: 6 Similarities

Here is a summary of some common features of both the Echo Studio vs Echo Plus:

How Long Is the Echo Studio vs Echo Plus Warranty?

Amazon offers a 1-year Limited Warranty for both devices with options to extend. Check the Amazon product pages at the links below for details.

The Echo Studio is available now. You can check 👉the current price at Amazon here.

As of this writing, the Echo Plus 2nd Generation is also still available while supplies last. You can see the 👉 latest customer reviews at Amazon here.

Is It Worth Getting the Echo Plus?

So what do you think about my review comparing the Echo Studio vs Echo Plus?

Now that Amazon has released an updated Echo device, do you think the Plus is still worth a look? Do you think Amazon will ultimately shelf the plus smart speaker?

My take is that with the price of the new Echo [3rd Generation] now more affordable than ever, I would be more inclined to buy that over the Plus if the price was my main consideration. If I really wanted the best possible sound quality and ok with paying a little extra, I would go for the Echo Studio.

Please leave me a comment below and let me know your thoughts. I will publish and reply to as many comments as I can.

One thing is for sure, with no end to the increasing demand for smart speakers in view [source Forbes], the resulting innovation will be a win for consumers for some time to come.  The devices just keep getting better and better, and fast!

Anyhow, I sincerely hope you found this article helpful. Please let me know if you have thoughts on how I can make it even better.

If you got some value from this article comparing the Echo Studio vs Echo Plus, would you mind giving us a quick share on social media?

It just takes a minute, and you can use any of the colorful social media buttons along the top and near the bottom of this page.

Thanks! This really helps to spread the word about our blog and gives us a little boost in Google rankings.